I’ve been making funny noises for a couple of months now, hinting at some secret project I’m working on. I revealed bits at a time, nothing more than grunts, really. For instance, you know I’m working on a story for an anthology. You also know it will fall under science fiction. I have not revealed more than that.

And the time is not yet ripe to reveal all of it. We are close, though, but first, there is another story to tell. A story that is related to the aforementioned and also its catalyst.

It’s about the birth of an idea and how it grew so large it required a bunch of talented writers to restrain, and when their combined efforts failed to control this unruly beast, they had no choice but to set it free. And so the thing leaped roaring from their hands, tearing asunder reality’s brittle veil as it burst onto our physical plane fully formed, fully realized, announcing its sonorous arrival with a monstrous thunderclap so loud it will echo in the annals of history for eons to come.

Gentle and not so gentle readers, may I present to you: 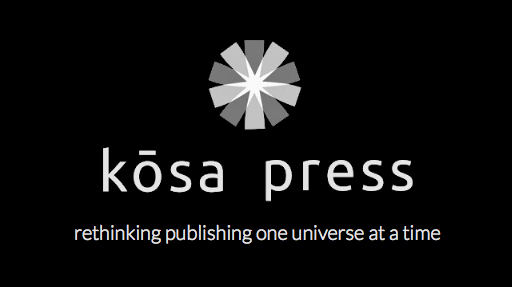 Instead of me clamoring with delirious excitement I shall direct you to our first blog post inaugurating the arrival of Kōsa Press. Please click any of the links above or even this one to find out how this thing came to be, from concept to realization. There is more to it than you think, and you’ll learn a new word. Trust me.