“Babylon’s Song” did not win the 2017 Sir Julius Vogel Award for Best Novella. Yes, I am sad. It would have been nice to have won but such is life. For those readers who nominated “Babylon’s Song,” thank you. It’s because of you that my novella was shortlisted and for that, I am eternally thankful. At the end of the day, if I can make you happy, then I’m happy, and to me, that is a big part of why I write.

To the winners,  congratulations! You folks rock!

As for LexiCon, this was my first ever convention and I loved it. I attended some awesome panels, most notably “Publicity for Writers” and “Worldbuilding,” which I enjoyed very much. “Worldbuilding” was an interesting discussion and exploration of both science fiction and fantasy, from alien planets to fantasy worlds fuelled by unique magic systems. We considered the obligation on a writer to stay true to the rules created for their world and to what extent they could deviate, if at all. “Publicity for Writers” dealt with the who’s who of New Zealand’s book Media and how to approach them and I’ve made some good contacts there which I hope to use in the near future.

I met some wonderful people at the Con, people I already knew from Facebook and social networks and I made some new friends. As you know, I’ve never been involved in fandom or any SF community for that matter, apart from my Interspecies co-authors who I’ve been working with for a couple of years now and who I also consider great friends of mine. So this experience was a good one. I just wish I had more time available for interaction as I missed out on the social get-together sessions in the evenings due to reasons beyond my control. 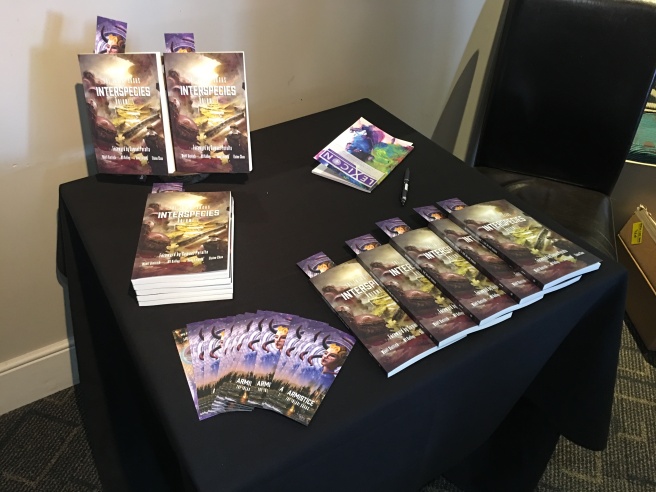 I’ve been a regular member of SpecFicNZ for a few years which is an association for speculative fiction writers here in New Zealand, and as a member, I attended their Annual General Meeting at LexiCon. And lo and behold, I’m now on the association’s committee, which means I’ll be getting more involved in local projects to further New Zealand speculative fiction. I really look forward to this.

All-in-all, I think achieved most of my goals for attending my first ever fantasy and science fiction convention. I left there feeling enriched and inspired and with a renewed zest in my step. I have lots to plan and do still, and thousands upon thousands of words to write before the year’s end, and I can’t wait to share it.

So there you have it. My weekend in a nutshell. I should do these conventions more often.