Another legend who requires no introduction and whose work will forever populate the halls of nostalgia is British artist and illustrator, Peter Andrew Jones. His illustrious career spanned 40-plus years, during which time he produced a massive number of fantasy and science fiction illustrations for books, magazines, and movies. Peter continues to receive commissions still and you should check out his website above.

Back when he was starting out, his art tutor, Bob Spearman encouraged him to attend the Saint Martins School of Art in London where he initially studied Graphic Design in 1970. Later, after being prompted by a visiting lecturer to combine his interest in realism with his imagination and skill, Peter discovered  a love for fantasy and science fiction which naturally prompted his career. Once he made the decision to become an illustrator things happened very quickly and Peter was soon neck-deep in producing covers and illustrations for fantasy and science fiction publications.

Over the years Peter has illustrated and painted book covers for  Isaac Asimov, Ray Bradbury, Arthur C. Clarke, Greg Bear, Larry Niven, Philip K. Dick, and many others. An anthology of his fantasy and science fiction work that he created between 1974 and 1980 was published under the title, Peter Jones: Solar Wind. While most of his commissions were for UK-based publishers like Granda, Futura, and Sphere, some might recognize his style and art from the early issues of Heavy Metal magazine. Peter also painted movie posters, and of interest here is the poster he did for The Sword and The Sorcerer.

created by Steve Jackson and Ian Livingstone in the 1980s, and particularly for having provided the original cover for the first title in the series, The Warlock of Firetop Mountain.  He also illustrated covers for Starship Traveller, Talisman of Death, and The Riddling Reaver, as well as over twenty cover illustrations for Joe Dever’s Lone Wolf game books and a number of covers for Mark Smith and Jamie Thomson’s Falcon series. A number of his fantasy images also appeared on the covers of Games Workshop’s White Dwarf magazine.

John Blanche, art director of White Dwarf said this about Peter’s version of Elric of Melnibone:

“Peter’s strong design sense and dramatic choice of colours have combined to produce the definitive image of Elric, as the battle-crazed albino, dominated by his demon sword, Stormbringer. . .”

Peter works primarily in hand-mixed oil paint and acrylic, using a unique painting medium he invented that he calls “acryloil.” And here is something interesting and utterly fascinating, Peter’s handmade prints that he sells via his website are sometimes embellished with gold and rare pigments such as lapis lazuli. That is pretty awesome.

Below is a small sampling of his work, scoured from across the Internet. Enjoy! 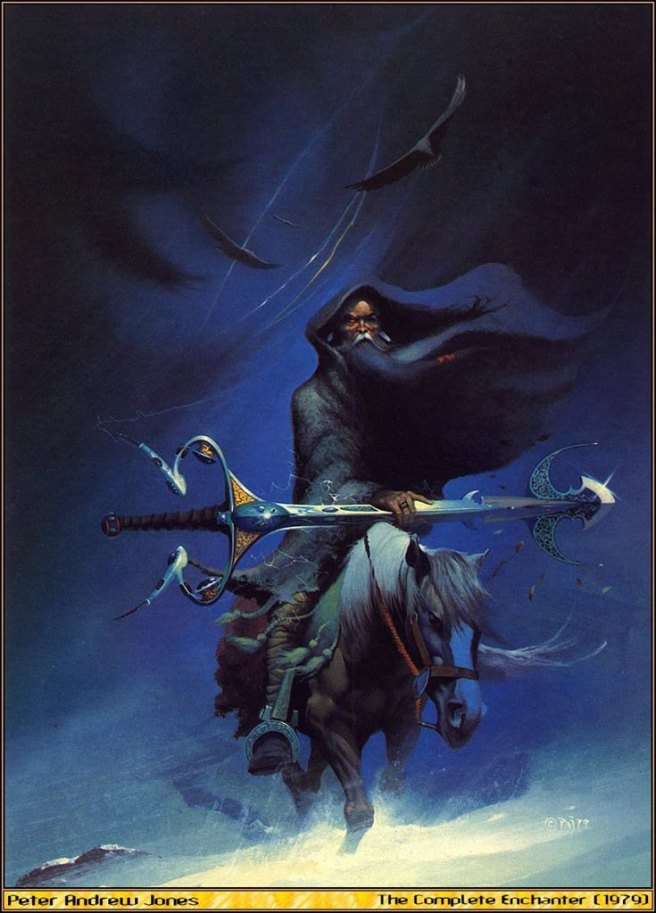 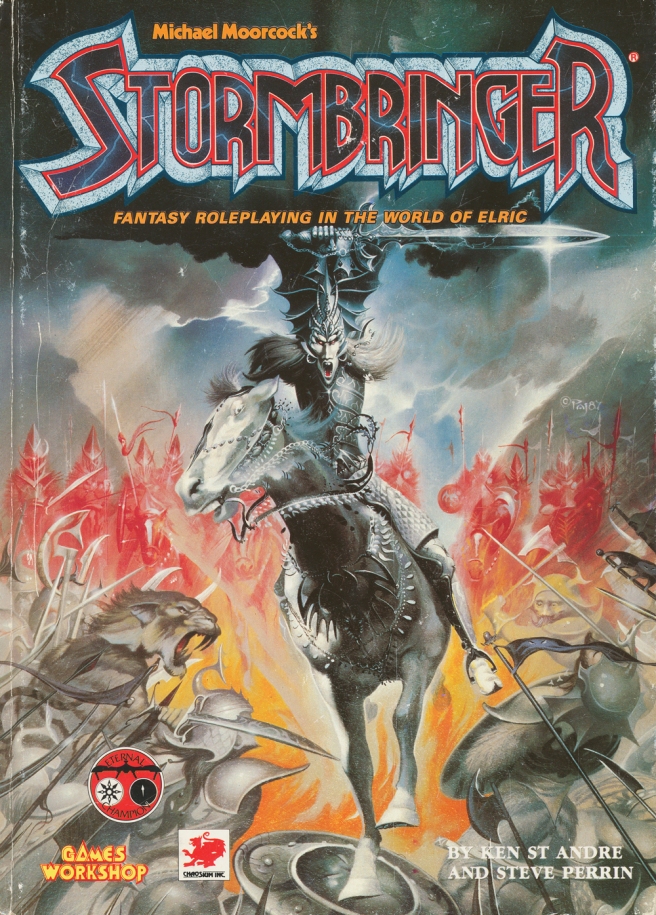 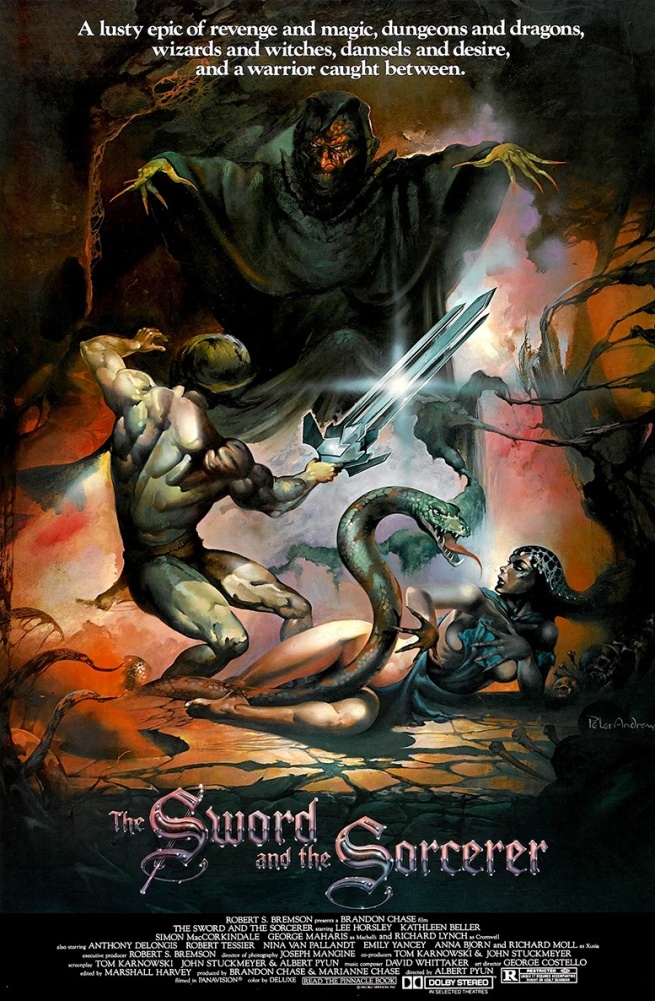 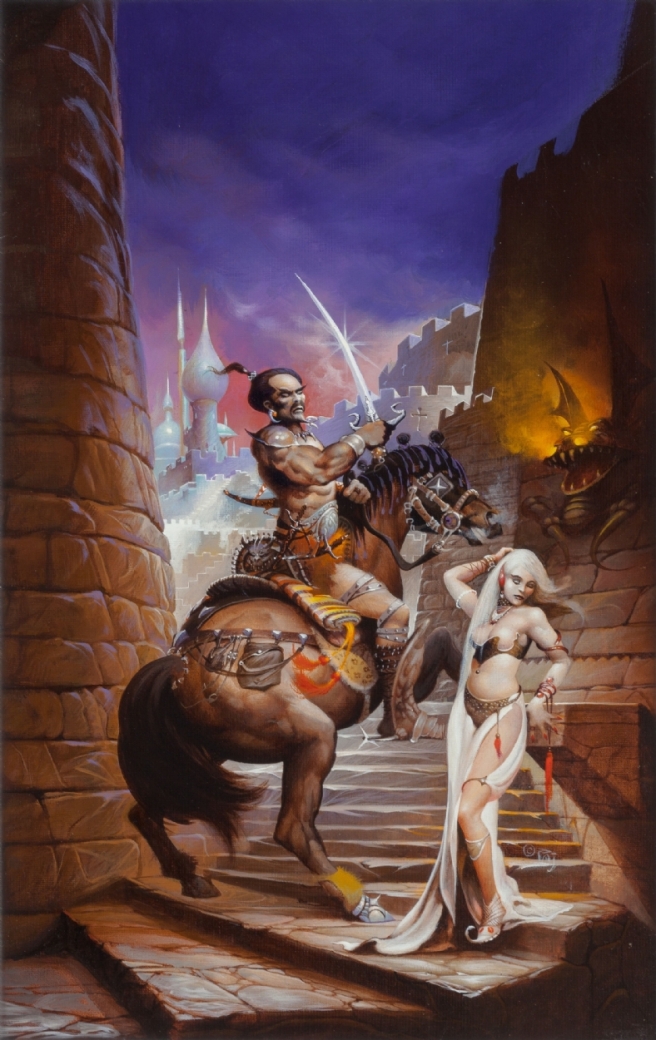 I had to force myself to stop collecting images for this post. Researching this week’s artist truly started as a leisurely stroll down memory lane but soon turned into a mad rush to find as much as I could for fear of running out of time. Alas, in the end, it was the running out of space thing more than anything else, that forced me to call a halt to my frenzied spree.

Peter’s work remind me how fortunate I was to have had the reading experiences I did as a kid. I even remember how addicted I became to those choose-your-adventure books. But it was the covers that drew my attention first, and like Jeffrey Jones and Frank Frazetta, Peter’s covers held mystery and intrigue, and for a young kid, even darkness.

Talk to you soon.