A couple of months ago I mentioned that my three stories in These Broken Worlds received a nomination for a Sir Julius Vogel Award. For those who don’t know, The Sir Julius Vogel Awards are held each year at the New Zealand National Science Fiction Convention to celebrate and recognize achievement in New Zealand science fiction, fantasy, horror, and science fiction fandom.

Alas, I never made the short list, but being nominated felt awesome. I wrote this at the time in response:

“My first ever nomination for words I wrote. I know it’s just a nomination and that the number of nominations will decide who lands on the final ballot, but as I write this blog, glee pumps through my veins and it’s a good feeling.”

Which brings me to today’s post. I want to give you some context to the award by talking about the author it is named after. As a speculative fiction writer, I found the history interesting and I hope you do too.

Sir Julius Vogel was a prominent New Zealand journalist and politician who was also elected Prime Minister of New Zealand twice during the 1870s. Historian Warwick R. Armstrong said this about Sir Vogel’s strengths and weaknesses as a politician:

“Vogel’s politics were like his nature, imaginative – and occasionally brilliant – but reckless and speculative. He was an excellent policymaker but he needed a strong leader to restrain him….Yet Vogel had vision. He saw New Zealand as a potential ‘Britain of the South Seas’, strong both in agriculture and in industry, and inhabited by a large and flourishing population.” 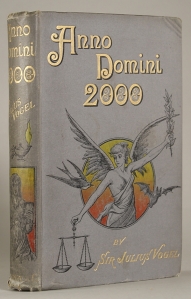 Not so strange then, perhaps, that this politician also enjoys the status of being the first New Zealander to have published a science-fiction novel. Anno Domini 2000, or, Woman’s Destiny, published in 1889, predicted a utopian world where women held the top positions of authority in government.

And wouldn’t you know,  New Zealand became the second country to entrench women’s right to vote, after the Isle of Man in 1881. In 1893, Elizabeth Yates became Mayor of Onehunga, the first time such a post had ever been held by a woman anywhere in the British Empire at the time. From 1998 to 2008 New Zealand continuously had a female Prime Minister. In fact, at one stage all five highest government positions (Queen, Governor-General, Prime Minister, Speaker of the House and Chief Justice) were simultaneously held by women.

As for Anno Domini 2000, it tells a futuristic story in which women rise to positions of power and citizens travel freely in aluminium ‘air-cruisers’. Vogel wrote the novel after stepping down as New Zealand’s Premier, a role in which he promoted a future where men and women would enjoy social and political equality.

In features Hilda Fitzherbert, the 23-year-old Imperial Prime Minister of the British Empire, who is caught between a villainous Australian republican and Emperor Albert, the dashing young ruler of the Federated British Empire. The future of the world is at risk when an Anglo-American war breaks out.

Generally not my cup of tea, not that I even drink tea, but then, I am also not of English stock, so I’ll reserve my opinion until I have read the book.

In his introduction to the 2000 edition, academic Roger Robinson listed some of Vogel’s other predictions. I’ve reproduced a few here: 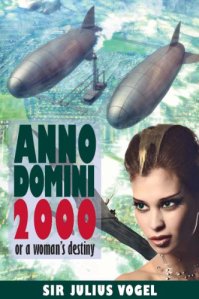 Robinson’s overall impression of Vogel is that the man was “…a utopian prophet of rare percipience.” Unfortunately, the novel did not sell well but later received posthumous recognition for its accurate representation of a future New Zealand. The book was reissued with an updated cover in 2001, and in 2002 the University of Hawaii Press published the very first American edition.

Hurricane Press released an ebook version in 2013, but whoever is responsible for the ebook’s atrocious cover should be chained to a metal chair and forced to watch the Kardashians for 48 straight hours without bathroom breaks. At least the ebook includes a retrospective chapter describing the origins of the book and the early newspaper reviews.

I don’t normally involve myself in politics, for various reasons, none of which I’m willing to elaborate on here (I’m neither left nor right). Besides, this blog is about fiction and art and books and word adventures. My reasoning for sharing this tiny piece of New Zealand history is simply because I thought you might find it interesting. At the very least, it puts the Vogels in context.

And there you have it. Tiny bits of information about the speculative fiction community this side of the world.