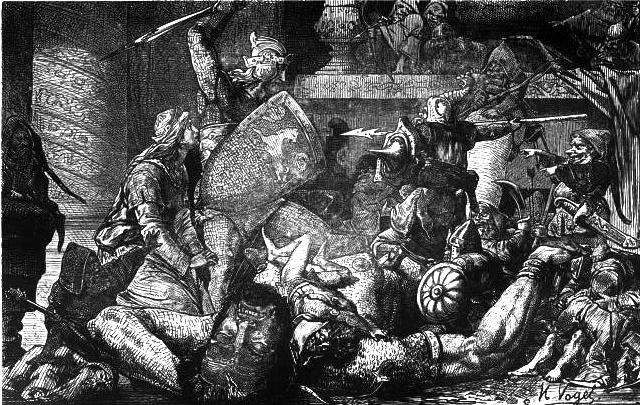 A while ago I briefly mentioned that Woelf Dietrich is a pen name. I took it  from Wolfdietrich who is a German hero of romance. I thought it apt given my primary writing interest. Also, there is a hotel by the same name in Austria, but that is another story.

I discovered the history behind Wolfdietrich about four years ago and liked the premise so much I adopted the pen name, albeit slightly altered. One of the reasons for choosing a pen name was that I did not want to write under my birth name in case I ever return to practicing law. The other reason dealt more with not wanting to embarrass myself if my writing sucked. The embarrassment factor still prevails, but having become more involved in the writing community, I now realise that my fear is not unique, and that in order to find any measure of success, I should write through that fear.

Getting back to today’s story, I have now grown quite fond of my adopted name. I also love that it is not some random thing snapped out of the air. The hero Wolfdietrich first appeared in the Middle High German poems of Ortnit, eldest brother of the Haddingjar, called Das Heldenbuch. Wolfdietrich was the son of Hugdietrich, emperor of Constantinople, but life did not start out well for our hero whose father repudiated his existence, believing him an illegitimate child.

He was left to the wolves in the forest, but fortunately, the emperor’s retainer, Berchtung von Meran, found him and cared for the young noble until he grew into manhood. Even then, luck did not favour our hero, for when his father died and he became heir to the sovereignty of Constantinople, Wolfdietrich’s brothers  drove him from his inheritance, forcing the young warrior into exile.

After an extended period spent at the court of King Ortnit in Lombardy and enjoying many splendid adventures that include falling in love, meeting a giant woman, and killing a few dragons, Wolfdietrich returned and liberated his kingdom. This is, of course, the abbreviated version.

And if you probe just  a little further you’ll find the following over at the Mythology Dictionary:

“After killing the tyrant Belligan, who adorned the city walls with the skulls of Christians he had killed, Wolfdietrich met a giantess who told him how Ortnit had been killed by the dragons. He met the grieving Liebgart and went off to fight the dragons but was overcome and thrown to the young dragons for food. He found the magic ring of Ortnit and his sword, Rosen, which he used to kill all the dragons. A knight named Gerhart claimed to have killed the dragons but Wolfdietrich was able to produce the dragons’ tongues which he had cut out, so proving his own claim.”

And that, my dear readers, is the history of my pen name. Apparently I’m a slayer of dragons.

4 thoughts on “The Meaning Behind The Name Woelf Dietrich”